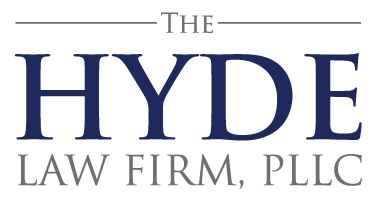 It’s difficult to deal with the aftermath of an injury. Pain, emotional trauma, medical treatment, medical bills and possibly the inability to work due to the injury can all come into play.

If the injury is through no fault of your own, you also have to fight to receive compensation from the party at fault.

Insurance companies will often offer a small upfront settlement to avoid a trial where you could be awarded a much larger sum of money. If you are out of work with medical bills rolling in, it might be tempting to accept the offer. Reach out to the legal team at The Hyde Law Firm before acting. We can usually represent you at no cost unless you win.

We are sensitive to the needs of our clients and know that every case involves unique challenges and opportunities. Our firm’s philosophy is centered on fostering client relationships and spending as much time as needed responding to your questions, learning about your needs, and answering your concerns. We care. Come talk to us if you are in the Granbury, Texas (Hood County) area. You have nothing to lose.

The types of cases we cover include, but aren’t limited to:

Car Wrecks, 18-Wheeler Accidents, Workplace Accidents like repetitive strain injuries, exposure to toxic substances and accidents that resulted from the use of machinery. Also Premises Liability such as slip and fall accidents, failure to warn of known dangerous conditions, sidewalk accidents or injuries caused by a defective surface in general, and swimming pool accidents.

Damages you may be entitled to:

Economic Damages represent the financial losses that you incurred as a result of the accident such as property damage, medical and hospital expenses (including future medical expenses), and lost wages. Also loss of earning capacity if your ability to perform your job is affected and you have to accept work with lower pay.

Non-Economic Damages such as pain and suffering, mental and emotional trauma, disfigurement, and inconvenience can also be pursued.

Punitive Damages can be awarded if the court determines that the actions of the defendant were especially harmful. Punitive damages are considered punishment and are awarded at the court’s discretion.

If you are involved in an accident, here are a few tips.